Home » Writings » The Teacher, The Student

The Teacher, The Student 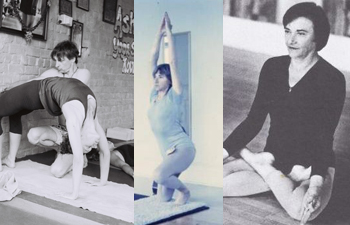 For me a challenging aspect about teaching is when a student stops studying with me. This is painful. Nine times out of ten I blame myself. Here are some questions that I ask myself, “How could I have cared about that person more? How could I have seen what their soul wanted? I pushed too hard. I was too intense. I left them alone too much, etc.” As you see I can be really hard on myself and a way that I get out of that mindset is by remembering my own path to Ashtanga and my first yoga teacher Marie Svoboda.

It was 1989. I was 27 years old, a full time waiter, and thoroughly lost. I didn’t just want a job; I wanted to do something important and meaningful, something that would give me power to change the world. I grew to hate waiting tables more each shift and I grew more distraught as it seemed that I would never find my dharma.

My only outlet was distance running. I ran as much as 70 or 80 miles a week. Physically, running helped me to run away from how useless and lost I felt inside but it still wasn’t leading me to my calling and I knew this. My body became so tight from running that I signed up for a yoga class. I can still remember walking into class and seeing the teacher, Marie Svoboda. She was standing on top of a stool giving instructions. She was 80 years old. Her face shimmered like snake skin.

Marie had taught in Seattle for more than 40 years. She was Seattle’s yoga matriarch. Marie wasn’t part of any lineage. She was a total original. I loved her classes so much that I didn’t care she followed the exact same lesson plan every time she taught the beginner class. I would watch her like a hawk and follow her around the room like I was her shadow…Marie and David. I soaked up every little detail of her interactions with the students. One time she walked by me when I was in a pose and dynamically exclaimed, “BORING”. She was interested in finding all work that took place along the way into and out of a posture. Her interest was in DYNAMISM. The moment the posture became finished or static it was boring. She believed that to be awake and intelligent, and at the same time to be still, was a rare experience. And thus long before vinyasa yoga became popular, she taught students to place huge value on using creative, intelligent movement as the means to entering into meditative states of awareness.

Through Marie’s community I discovered a videotape of Pattabhis Jois teaching Primary Series to Chuck Miller, Richard Freeman, Tim Miller, and Maty Ezraty. The video blew my mind and something intangible was calling me to Pattabhis Jois. I read in the Yoga Journal that he was coming to Maui for one month to teach. Within a week I had booked my plane ticket.

On my last day in class with Marie, I was lying on my back, and she stood right over me and said, “You be careful. Don’t get hurt.” The teenager inside of me wanted to get up and leave the room immediately. I felt like she was trying to hold me back. That was the last class I ever took with her. The next week I was learning the Primary series with Pattabhis Jois and six months later I was in Mysore. I was finally on the right path…deeply steeped in the lineage of Ashtanga yoga.

But an interesting thing happened to me as I continued to practice. Marie’s teachings slowly worked their way back into my psyche. Even today when I practice, her voice, along with Guruji’s, pops in at certain moments. I understand that her words, “You be careful. Don’t get hurt,” didn’t come from a negative place. She wasn’t trying to hold me back. She was only warning me because she truly cared.

So now when I’m upset that a student has started to study with someone else, I've come to realize that you can’t tell why a student leaves, what he or she thinks of you, or how you might have helped him/her. As students we don't always stop studying with teachers for the reasons we think we do. More often than not its the mysterious universe, and not us, that chooses who we learn from. Yes, I stopped studying with Marie but she inspires me everyday to go further in yoga. And I can only hope that for those students who stopped studying with me and have moved on to other teachers that perhaps I did help them grow in their Yoga. And maybe they do hear my voice at certain moments while they practice. I don’t know and I’ll probably never know. But what I do know is that Marie continues to teach me and I’m forever grateful to her and her devotion to teaching yoga.

P.S I did see Marie again. It was at her retirement party. She told me I could take any props or pictures from the room that I wanted. I took her stool.