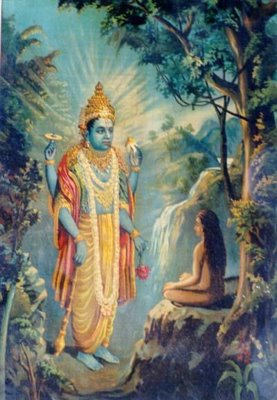 Everything needs to be tied back to the practice. We are all primarily engaged in practicing. The value of the experience counts. I study the texts: The Yoga Sutra's, The Shiva Samhita, Gheranda Samhita, Bhagavad Gita and others in order to better understand my asana practice. When I read the Yoga or Shiva Sutra's I read with the question how does it apply to my practice? I don't value theoretical ideas much. I want to apply it to practice. I also look for confirmation from the texts. I figure that the people who experienced and wrote down the concepts and practices in those books discovered them by practicing and that anyone who practices seriousy will also discover the same sorts of things. The texts ought to confirm what I find in my own practice.

The importance of going within alone to find your Spiritual Life, your Freedom, your Yoga. Once a young boy was enjoying some time sitting on his father's, the king, lap. The king's first wife was jealous of this boy's mother who was the second wife. She forced the king to put the boy aside. The boy went back to his mother dejected yet feeling stubborn. She tried to comfort the boy by telling him that Narayana loved him always and best. He perked up and became curious as to who Narayana was. He pestered his mother with questions about Narayana. Finally just to get a little break from the boys' eagerness, she told him that Narayana was the greatest good and the greatest love and lived deep in the center of the large, dark, and scary forest that surrounded the palace. The boy immediately set off to find Narayana. On the way he encountered a host of different characters including forest ascetics, lions, bears, snakes. To each he asked where can I find Narayana? This question brought many types of responses: from eye brow raising, to concern, to marvel, and even a bit of lip smacking–But no one could answer the question. The boy walked deep into the middle of the forest and finally came to a spot where he decided to sit down. He decided he would remain there without food or drink until he found Narayana. He fasted and prayed and did Tapas to such a degree that the entire universe began to take notice. The demons and forces that would do the boy harm tried everything to shake him out of his resolve to meet Narayana. The Gods, on the other hand, became fans of the boy, eager spectators, rooting for his victory. After seemingly eons had passed Vishnu (another name for Narayan) appeared in all his glory before the boy and set him on his lap–showered him with love and granted him the boon of becoming Druva, the pole star in the North. An eternal guiding light in the heavens pointing the way for all seekers to meet Narayana.

Explanation and Application to Asana Practice

Here are some things-the love my parents gave to me is not sufficient to give me spirituality. I have to leave my parents behind. Pay respects, appreciate the love they gave and give–acknowledge and work on forgiving their shortcomings–my parents failed me in many ways–It is important not to get stuck in anger over their failures and also not to get stuck trying to get my spiritual love from them. You have to go into the forest alone. Get clear on your highest goal. The biggest, deepest loftiest need within you–What is it for you to meet God? What is most divine for you? Its a thoroughly personal question. One only you can answer. It's also a scary question whose answer has to lead you into the wild, dark unknown forest of your psyche. The journey inwards to the center takes adamant resolve, courage, and the ability to be and walk alone. Stepping on your mat each day is walking into the forest, practice is sitting down in the middle of that scary place and undertaking to meet the source within-a time of fasting, of vision questing, a time apart–something between you and the sacredness inside you, a forging within, opening yourself to encounter the wildness, magic and perils of your mind–and eventually to meet your teacher, your wisdom, the wellspring source of knowledge.