My 10 year practice of Surya Namaskara 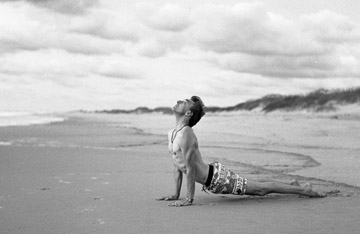 For ten years my only yoga practice was performing the excellent set of poses known as Surya Namaskara.

I recently had a student ask me what I was doing during that decade that made it so that I didn’t have a more extensive practice. Here is my answer.

I was initiated into Hatha Yoga through Fred the dishwasher at 16 years old. He taught me how to perform the physical movements and poses of Surya Namaskara. I practiced by myself outside on an isolated  beach near where I lived. The combination of movements, breathing, concentration and being outside in solitude with the earth, waters, sky, air, and space as my companions led me to have a sort of mystical awakening where I experienced a sacred oneness with the elemental forces and everything in existence. Strangely the experience of profound unity with all things also caused me to feel disconnected from the ordinary pursuits of people my age and I lost interest in school and the future it promised even though I still got good grades. By the time I finished high school I had turned into a rebel who wanted nothing to do with going to college, getting married, settling down to a steady job and having a house in the suburbs or other prescribed orthodox ways of negotiating life.

I found kindred spirits in the world of punk rock in Seattle in the early 80’s. And yet unlike my punk friends I continued to do Sun Salutations and oddly this meant that my rebelliousness and the yearnings of my spirit searched for expression in two opposing outlets. On one hand I became steeped in the punk counter culture and listened to the angry punk music whose lyrics lashed out at societal hypocrisy, political corruption, injustice, needless violence and war, the stupidity of conforming, and general pandemic or creative deadness that appeared to afflict most elders. I even took up the bass, began to play protest music instead of just listening to it. I had fantasies of using my shy voice to be a bigger part of speaking out against all the wrong that I saw and felt was taking place. The other outlet for my rebellious spirit came from the unlikely source of doing Sun Salutations—no matter what I stubbornly and inexplicably continued in this small practice in any and every condition.

My first experiences of doing Sun Salutations had made a deep impression on me maybe because I felt that I had a direct experience of another, more real, immediate, and beautiful realm. I was not entirely clear on what I had found but at least I knew there was something else besides this ordinary, unsatisfying world. I didn’t yet know that one could formally attempt to reach the invisible spiritual realm through the discipline of a systematic study. As a punk I came across the writings of Alan Watts and Jack Kerouac and found new further connections between my rebelliousness and the sacredness I experienced doing Sun Salutations. Here are a couple examples of their words.

“Colleges being nothing but grooming schools for the middle-class non-identity which usually finds its perfect expression on the outskirts of the campus in rows of well-to-do houses with lawns and television sets in each living room with everybody looking at the same thing and thinking the same thing at the same time while the Japhies of the world go prowling in the wilderness to hear the voice crying in the wilderness, to find the ecstacy of the stars, to find the dark mysterious secret of the origin of faceless wonderless crapulous civilization.”
― Jack Kerouac, The Dharma Bums

“Only words and conventions can isolate us from the entirely undefinable something which is everything.”  ― Alan Watts.

Their words affirmed that I did not want convention. I wanted to use my life to be in the hunt for expressing some deep, creative, wild and full of spirit whatever that meant. My youthful imagination caught on fire and caused me to burn right through the punk world—I abruptly quit the band that I was part of and was at a loss for some as to what to do. I eventually went to college in Olympia where I joined the independent studies program and wrote my own course of study. I spent time reading eastern philosophy and western psychology, studying meditation and medicinal cooking—and doing Sun Salutations. At this point I still had never been to a formal yoga class and hadn’t even thought to go to one! I also wandered around in the magical forest that surrounded the school and kayaked the waters of the Puget Sound. Without even knowing it I was embarking on a long passionate and yet strange and compass-less quest. It would take a long time before I found any solid answers to the questions that wrenched my heart about who I was or where I belonged in the world. I didn’t even have clear ideas about what I was looking for or what I was trying to do. I was probing around mostly confused and in the dark but also somehow adamantly clear that I was looking for something that I hadn’t found and that apparently was extremely difficult to find. Much later I learned that I was looking for a way to know and share the sacred dimension of existence. After many twists and turns in my path I found my way to Ashtanga Yoga. I finally found a powerful and creative technology that could make a difference in helping people to pierce through the trappings of this world and know the continually renewing fount—the hidden wellspring—the eternally mysterious and unfathomable sacred realms. My practice expanded beyond Surya Namaskara even though it didn’t necessarily have to. Whoever you are and whatever you do, no matter how busy you are you you can spend just a few short minutes a day and gain the great benefits of doing Surya Namaskara. You only need to have a bit of soulful knowledge of how to perform a few basic postures with basic conscious breathing. You might do like me and fasten your self onto Surya Namaskara like a barnacle to piling and never let go—establish yourself in a routine of doing a little bit in the right spirit. And also even if you decide to go further and make a larger commitment to the discipline be sure to keep track of the simplicity of it all. The main thing is to see that your practice serves you in your quest to build a meaningful life centered in serving the world in your own original way.

At the present time in my practice I have circled all the way back around to when I began on the beach by myself not knowing what I was doing. When I began I was unattached, trusting and open—free from pretensions or expectations or goals or ambitions. And now when I step on my mat with all my expertise and past experience in tow I aim to unburden myself from my knowledge, to drop my experiences and expertise as well as my ambitions and expectations. I wish to know a state of consciousness that is beyond right or good or disciplined or faithful or wise. I practice to have the strength to remain as open, naive, curious, and uninhibited as a child at play. I attempt to use my yogic powers to know what I discovered on the beach way back when—the best way to live is to be vulnerable despite the many reasons to close off and become bitter, cynical or hard; to trust that the world will always be a magical realm where infinite possibilities for creative expression exist and goodness forms the core of everything.