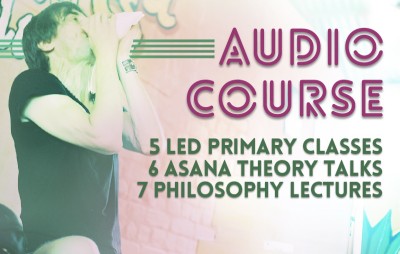 (Files sent to email used at checkout.
Email asanakitchen@gmail.com
if you'd like to gift this course for a friend.)

*All talks were professionally recorded.

-Classes all have different rhythms and durations of time

- 1 hr 32 minutes. Class is traditionally counted until Sarvangasana. At that point, David adds different variations to the shoulderstand sequence.

- What will give me the skill in action that I am seeking and will allow me to repeat what I want to reinforce?

- How a teacher serves the practitioner

- Courting Stability on the Edge of Imbalance

- In your asana, the only action you want is one that involves risk.

- How do I make a simpler version of an asana so that I will take a risk?

- Vinyasa means: Any strategic movement that leads to dynamic stillness.

- How to utilize the vinyasa position in a Led class?

- Repeat what you reinforce.

- David teaches the categories of the Samkhya tree

- Capturing the nectar of the moon in Inversions

- In defense of Inversions

Talk 7 - HOW TO TAKE THE LED PRIMARY

- How you get into your pose is just as important as being in it.

- An effective transition happens when you embrace constant change.

-“The human being never ceases to act.” Bhagavad Gita

-"In this world whatever is gained is gained by self effort. Where failure is encouraged it seems there has been a slackness in the effort.” Yoga Vasistha

-“The wise one should know what is attainable by self effort and what is not.”

“Show a Russian school boy a map of the stars that he knows nothing about and he’ll come back with corrections. No knowledge and unbounded conceit. But then you’ve got to see the good side. His conceit which comes from youth but on the other hand there is an independent spirit and boldness of thought and conviction.”

- David looks at Book 2 Sutra 1 on Kriya Yoga (Tapas, Svadhyaya, and Isvara Pranidanha) and the gifts that mastery of them generates.

- Skill in Action and Listening

- You are extending radical control over your actions and at the same time realizing that all action is futile.

- What are you extorting your will towards? Knowledge of Self. To understand your intrinsic spiritual essence.

- We deeply underestimate our powers and what we are capable of but a daily yoga practice, really getting in there and trying, starts to show you little glimpses of your power. Ultimately, it’s the power to fulfill your dharma. To live the life of your vision and that the universe envisioned for you and getting in touch with that. And having the discipline, humility to follow that through.

- There’s not one thing about your body that needs to be different to fulfill the dharma that you came out of the womb with.

- There’s a constant negotiation between your effort, will, and the fact that you are being led by the universe, choiceless. So you are trying to discover what the universe wants you to be. And at the same time you don’t give a darn what any other person, being, thinks or says. They don’t matter at all! It’s you. You. You’re brain, your hands, your feet, that is going to make whatever happens in your life happen. And if you have some big dream you better get started, or keep going, because it’s only going to happen with you own extertion. And the texts keep hammering it. To the point where they basically say, fate, calling, destiny does not exist because apparently back then a lot of people were saying, “It’s in the hands of God…so go ahead lead me on.” And the texts say, “No! It’s your own effort that’s going to make it happen.” But the texts are very encouraging because they say, “If you are willing to do the work, you can do it.”

- “Nothing is born without seed. Without seed there can be no fruit. From seed arises seed. It’s known that fruit comes only from seed.  Just as a farmer plants a certain type of seed and gets a certain crop so it is with good and bad seed. Just as a field that’s sown without seed is barren so without human effort there is no fate.”  — Yoga Vasistha.

- Your effort plus whatever forces are at play. The yogi decides that those forces at play that are beyond him are benevolent. They have his interest in mind. They aren’t just terrible forces that do what they do.

-"Faith is not a popular word for many of us. It implies that I’m supposed to just believe something. Faith is often tied to a religious feeling. But I encourage you to see FAITH as FAITHFUL, LOYAL, TRUSTING, BELIEVING."

- One word for faith is curiosity.

- The whole system of Ashtanga is designed for you to breathe.

- Use the practice you’re doing to access the breathe consciously.

Talk 4 - THE SEER AND THE SEEABLE

- When you make a deep contemplation between spirit and material you can start to separate the two.

- When the thought activity ceases this is yoga.

- Yoga is to stop the flow of activity and then apprehend the spirit.

- “I am the sight of Brahman. immortal, undying, eternal law, unique bliss."

- Focus on Vitarka and Vicara.

- Samadhi means absorption and the principal technique to stopping thought.

- Trying to connect with 4 forms, vitorka, vicara, ananda, and asmita.

-“The enlightened ones are forever in samadhi even though they are engaged themselves in the affairs of the world. On the other hand one who’s mind is not at peace does not enjoy samadhi by merely sitting in the lotus posture.”

- The mind was designed to be empty and then it can work. Then you can really interface with reality in a deep way. You can understand what is gong on here.

- There’s a whole way of being that doesn’t have to formulate a thought about it. It’s not about bliss. It’s not about anything other than whatever it exactly and whatever the experience is when a filter hasn’t come through. Yoga tells you that’s when you actually understand. When you really get wisdom about who you are and what this world is about.

Within 24 hours, audio files will be emailed to the address used at check out. Please make sure this is an email address that is used often. Check spam folder if files aren't received within a day.